The Cold Storage exhibition was postponed. Please see Stasis for other itterations of this project.

For Cold Storage, an exhibition at

Space 11 in Dayton, Ohio, Gabriel Akagawa creates the work Stasis. It is influenced by ecological consequences of aeronautic and hydro industries present in the city.
This project is produced in collaboration with studio assistant Alice Steffen-Marshall, audio element contribution from Jennifer Mosier, and contributors to http://justonethingbefore.blogspot.com/ 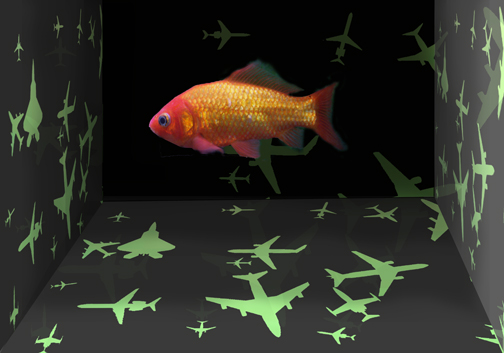 In relationship to the idea of Cold Storage Akagawa contemplates death, dormancy and suspension. The processes of life involve periods of stasis. Stasis is a “state or period of stability during which little or no evolutionary change in a lineage occurs” (Merriam-Webster dictionary). Western industrialization, and areas of the world influenced by it, has progressed very quickly with too little reflection in many respects. In doing so humanity has created self-destructive situations in evolutionary progress. Economies collapsing, global warming, industries failing, housing crises, and civil strife are but a few current byproducts of progress without holistic thinking. Akagawa introduces these ideas as well as another meaning of stasis, “a state of static balance or equilibrium,” (Merriam-Webster dictionary) though suspending objects physically, as well as placing their meaning in question by juxtaposition with time-based materials and objects.

The installation has four main components: a canoe, plants cast in ice, planes painted on the floor, and a suspended bench. 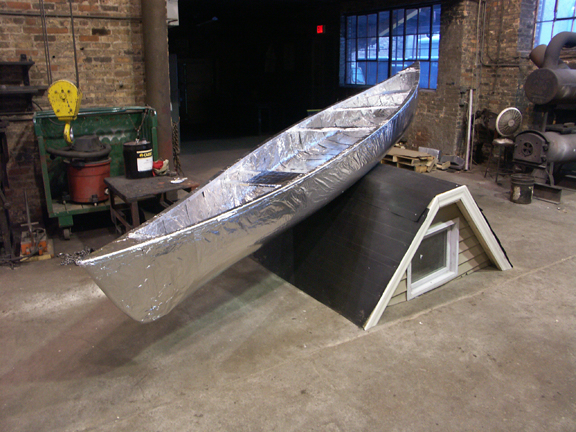 A 17-foot long canoe will be propped in the air atop a supportive, rooftop-like structure. The top edge of the canoe is at tabletop height. The canoe is faced with aluminum foil. Inside the boat there are plants frozen in blocks of ice. The ice may thaw during the course of the exhibition, melting into more water at the bottom of the canoe. A rope will tether to the boat’s bow. This will be attache to a claw-foot cast iron bathtub with a fish is swimming in it.

Small luminescent planes are painted on the tar floor in formations of star systems. The canoe and bench will be dramatically lit, allowing for dark spaces in-between the objects to illuminate the constellations, creating a topsy-turvy feeling. This perspective with the night sky underneath allows the viewers to think of themselves sitting or standing over water that is reflecting the night sky overhead. It also allows one to think of the planes as buried below.

A long bench is suspended between four columns in the space. People may sit and sway slightly, looking to the floor, observing the slowly melting ice blocks (accelerated by their own body heat) and listening to an audio recording of creaking ice from a frozen lake. These elements of leisure (the canoe and bench) are subtly undermined by the thought that the viewer is in an imagined scene of flood.

This scene refers to a narrative of a flooded future. Many theories of global warming entail the raising of water levels. Humanity’s use of planes and pollutant industries has resulted in an increase of greenhouse gasses. In this installation, there is hope frozen in the biological material of the frozen plants and swimming fish in the ark-like canoe. Our relationship to water is tenuous in our present and future, as new water-based industries are aware of in Dayton. The manifestation of a canoe covered in foil also alludes to popular culture images of doomsday theorists as fanatical, like “crazy” people blocking aliens from reading their minds or the government from monitoring their behavior. 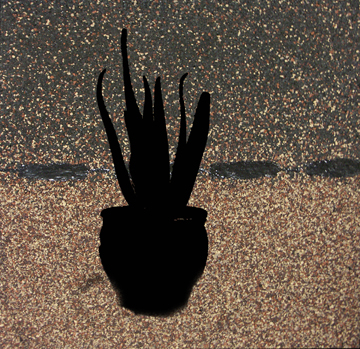 Almost all of the materials and objects of this project come from Akagawa’s own house (Please see Health and House for re-purposed home material projects) and life and he will reuse them again in some form. For example, he and his wife use the canoe on their excursions into nature. The water in the cast ice comes from their rain barrels. The aluminum foil will be reused in processes of Akagawa’s metal-casting practice and then recycled. The wood will go into making an arbor for growing vertical plant structures and creating shade in their backyard. Each of the shingles left over from a roof repair job on their garage, now under the canoe, will have an etched iconic image of an element of human peril. It will be as if there were a person trapped in the canoe, telling the story of her or his last days, saving the goldfish and houseplants. These shingles will be for sale during the course of the exhibition. 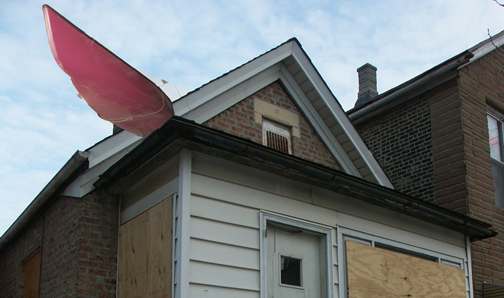